During the 2.5 years our app’s been on the App Store it went through a lot of makeovers. But there’s one screen that has undergone the most changes. This is its story. To see how other screens have transformed, you can check my old post.

The problem with iOS restrictions for third-party applications

While making Early Game Alarm, we encountered one major problem: third-party alarm clocks on iOS have certain limitations. I’ll try to explain. They need notifications enabled in order to ring. However, if you turn on the mute switch or enable Do Not Disturb mode, these notifications will be silenced. There’s exception for that, too! If the app is left open, then it will be able to make a sound, no matter whether the phone is locked or not. Great! Simple! Ooor not?

I used several sentences to make this clear in this blog post. When I talk to people, I still cannot give enough information in just one. Since I’m not in direct contact with all our users, we really needed to make this problem understandable through the app, because there’s no use of an alarm clock (no matter how awesome it is) if it doesn’t ring. Don’t you agree?

What we believed was a simple and elegant solution

So, somewhere, somehow we had to put this (not so) tiny piece of the information and hope everyone will read and understand it. Since it is essential and it really should be highlighted, we dedicated one entire screen to it. And this is how that turned out. 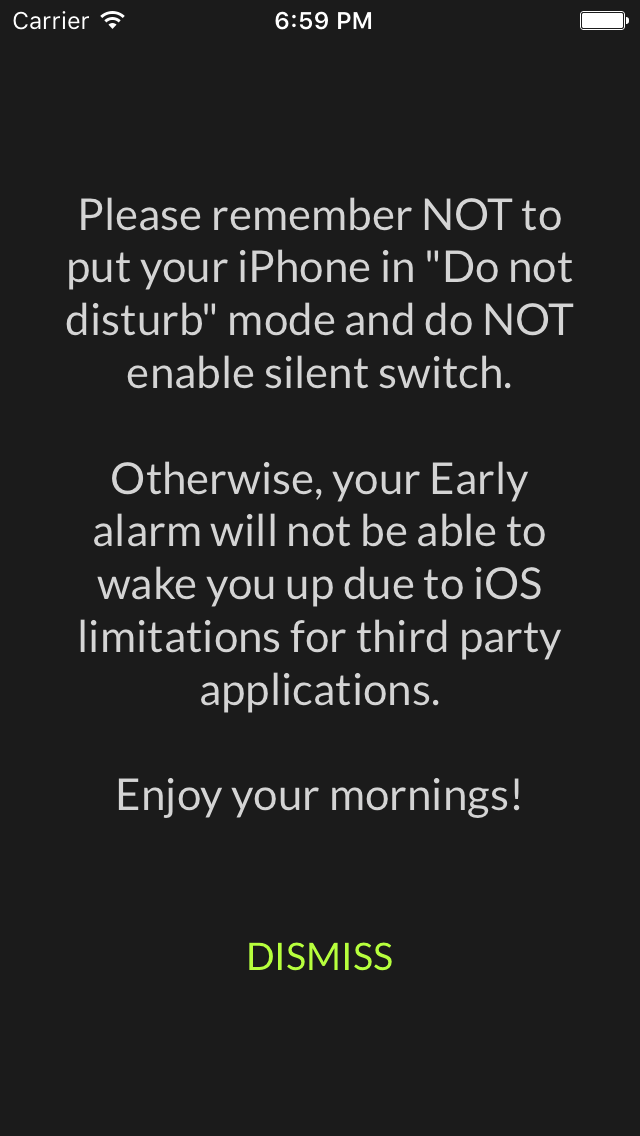 Let me please say something in our defense! We decided upon simple and elegant solution, just plain text on a dark background, the same as through the rest of the app. We didn’t want to distract users’ attention from the text with illustrations, buttons, etc. We made the font size bigger to make it easier to read and to look more important, ‘cause, people tend to skip stuff written in small fonts. Of course, soon we realized that it looked too much like this. 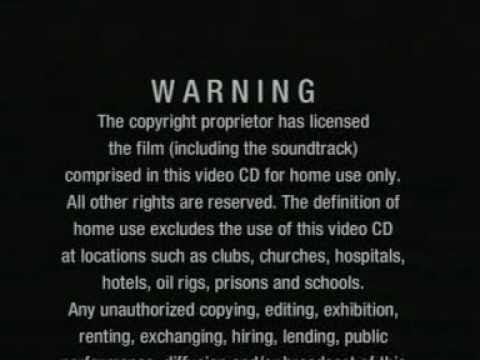 Why nobody read our screen

This looked like something people used to sleep over at the beginning of movies. Thankfully, this version survived only beta testing, and never reached real users. It was an eyesore, comparing to the other shiny, sparkly, colorful screens. Before our big release, we tried to spice it up. So we came up with this. 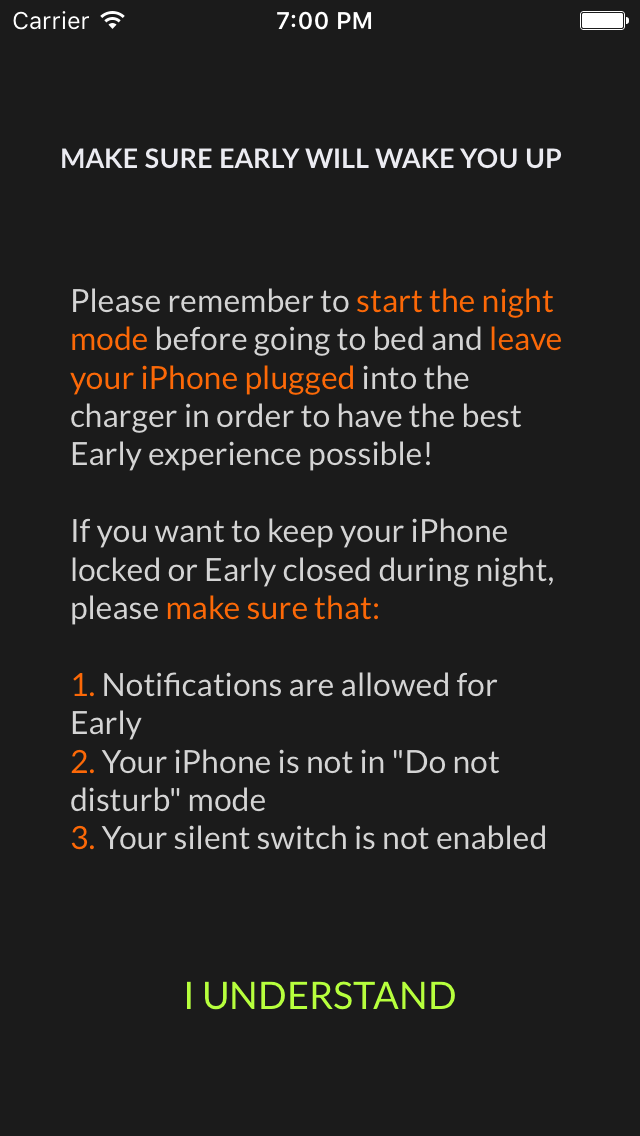 First, we chose the “positive” approach. Instead of telling users what they shouldn’t do, we explained what they should do so the alarm could ring. We read somewhere about how that is better. Also, the OK button seemed so generic, and we chose “I understand” text to somehow imply to the users that there is something that should be understood.

Then, to make this horribly long text “fun”, we highlighted some important words. But, it wasn’t just that. The main reason we did this is that we were hoping to reach more people. Even the ones who really don’t like to read would at least glimpse some of the important words and, hopefully, that would catch their attention.

And were we wrong! Not one person read it. None of our friends, family members, coworkers, nor external testers ever read it. Only some people we asked to check up our English did. But even some of them got pretty confused. As soon as we observed several people during UX testing routinely skipping this screen we knew we weren’t even close to solving this problem. What’s worse, we got some App Store reviews from disappointed users who felt let down by Early - it didn’t wake them up, and they had no idea why (even though I explained it).

Joy & Neat to the rescue

This screen needed a significant makeover. So that is precisely what we did. We literally inverted it. The new background was white, text black, it had an unusual illustration and some hashtags. It was nothing like the previous one. 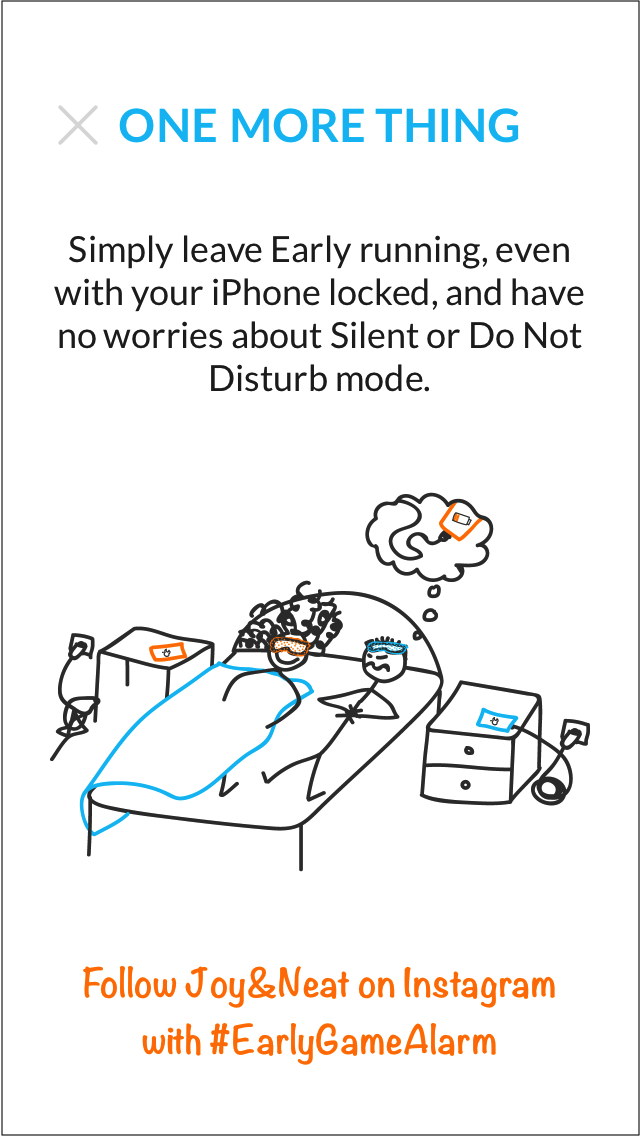 The idea was to make it so exciting and different from all the rest, people are going to want to see what it is about. Even the close button was not so prominent so the users would really have to look at the screen to find it. We managed to reduce the text to only one sentence. And the drawing was one from Joy&Neat illustrations, which were part of our marketing campaign at that time. They were actually to blame for the white background - simply weren’t looking well on the dark one. And so, everything made sense again.

One problem, though. It was too different. Now it looked like an advertisement - also something people tend to skip. So still no improvements in UX. However, we didn’t have a better solution, other features were waiting in the line for development, so this one remained active for 7 months, until our next “redesign update”.

Do Not Disturb - Early is running

Conclusions we got until then: we needed something short & sweet and not too different from the rest of the app. Finally, a solution that fits appeared. 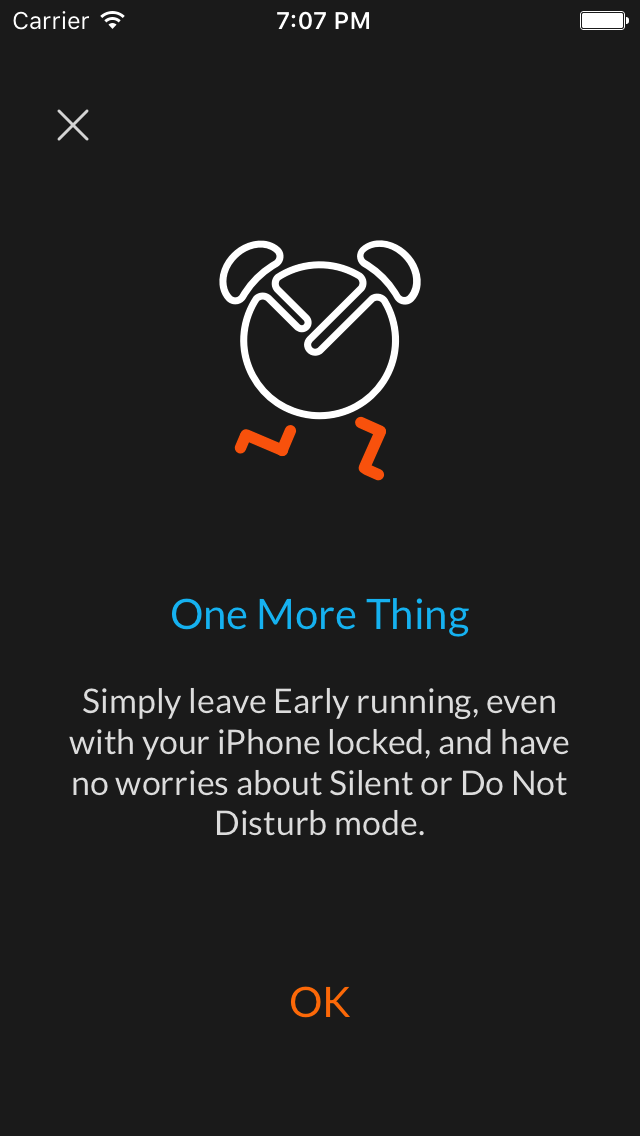 We went “back to black” and used our logo, that was running, to illustrate how the app should be left running during the night. Cute, right? That was it. The best one so far. Looking back we were kind of embarrassed and also kind of proud and relieved that we finally made it. Probably wasn’t perfect, but at least it was not wrong.

The number of downloads remained the same and bad reviews stopped coming. But, that might have had something to do with the possibility to answer on them, which App Store introduced somewhere along the way. We still don’t know whether all this helped or not. We are still not sure does anyone read this or not. But at least we could say it does not look like titles and credits anymore.

And then brand new redesign came, and the screen got a fancier and less abstract drawing, that shows how Early is on the screen while the phone rings. It also matches a lot more with the rest of the app. We’ll see how it goes now that we made the change again. 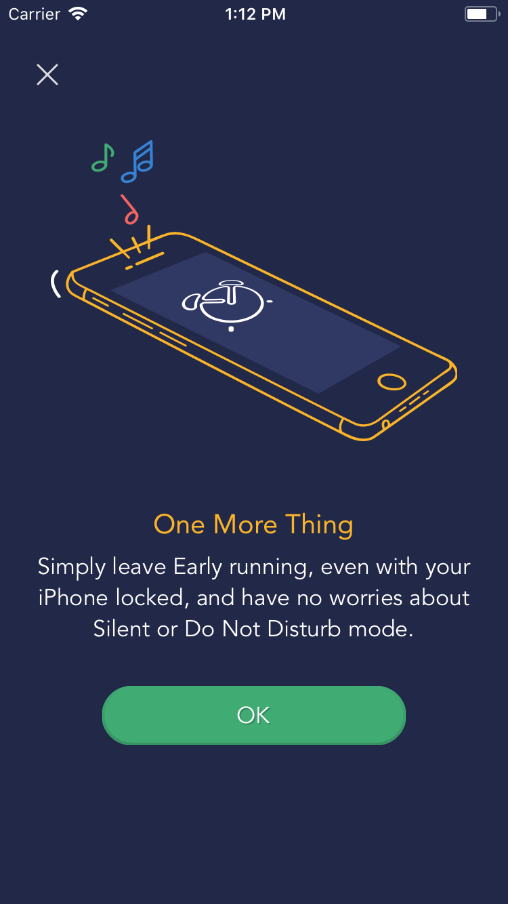 Sometimes we don’t even notice how far we have gone until we look back. And as soon as we realized what we did with this screen over the months and months of development, we wanted to share our story with others. We are aware there’s still a lot more to be done. But maybe we don’t have to do it alone. We’d love to get ideas and tips.