How We Moved to Barcelona and Lived a Digital Nomad Life

After telling our friends we were about to move to Barcelona for a month, live and work in the same apartment, they thought it was a wonderful idea not very likely to happen.

After telling our friends we were about to move to Barcelona for a month, live and work in the same apartment, they thought it was a wonderful idea not very likely to happen. Eleven of us were going to share a 100 square meters apartment with only one bathroom. You need to have an awesome team willing to take the risk, like we did. 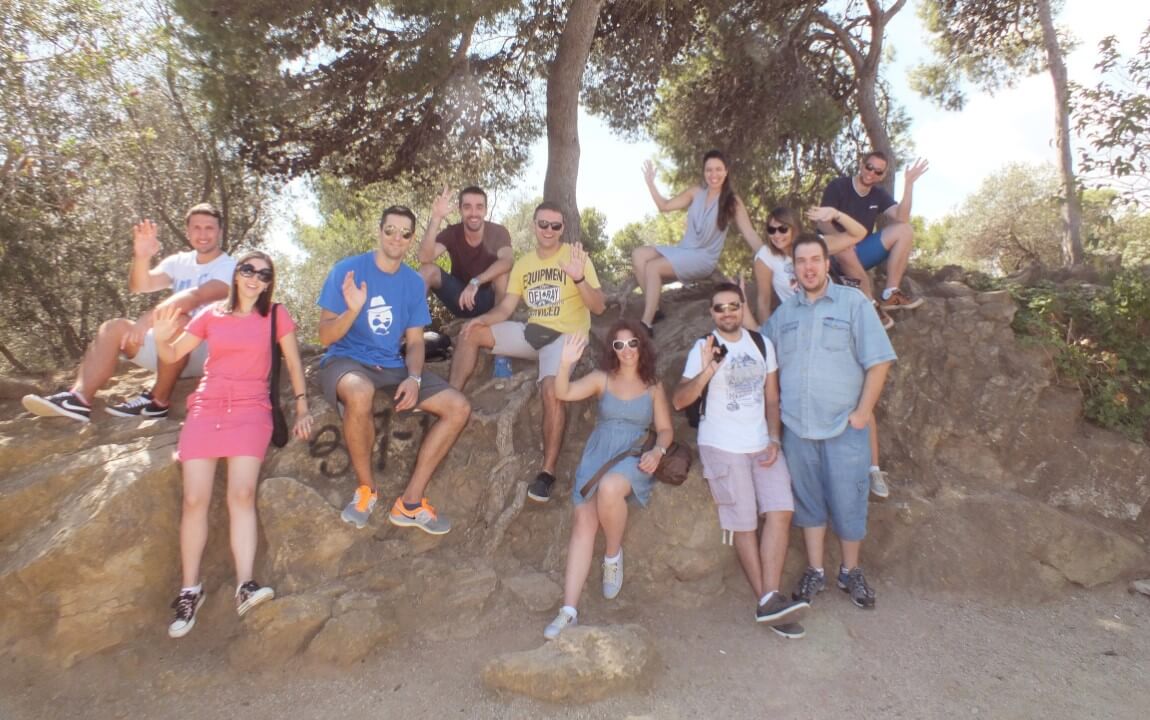 Coming up with the idea

Some people from the office come with experience in international students’ organizations which usually assumes a lot of traveling and meeting different cultures. That spirit didn’t leave us once we started working. Only a few months after starting in the firm, I came up with the idea to work remotely from Finland for a week. At this time Dusan just came back from his trip to Brazil full of impressions and answered that he actually had this idea of moving the whole team to some interesting city in Europe for a certain period we would all agree on. It was that kind of thinking that stayed in our heads for some time but seemed too complicated to become a reality. Except I was the wrong kind of person to share it with.

Another very convenient fact was that DrupalCon 2015 was supposed to be held in Barcelona in September that year, so it wasn’t so hard to choose the place. 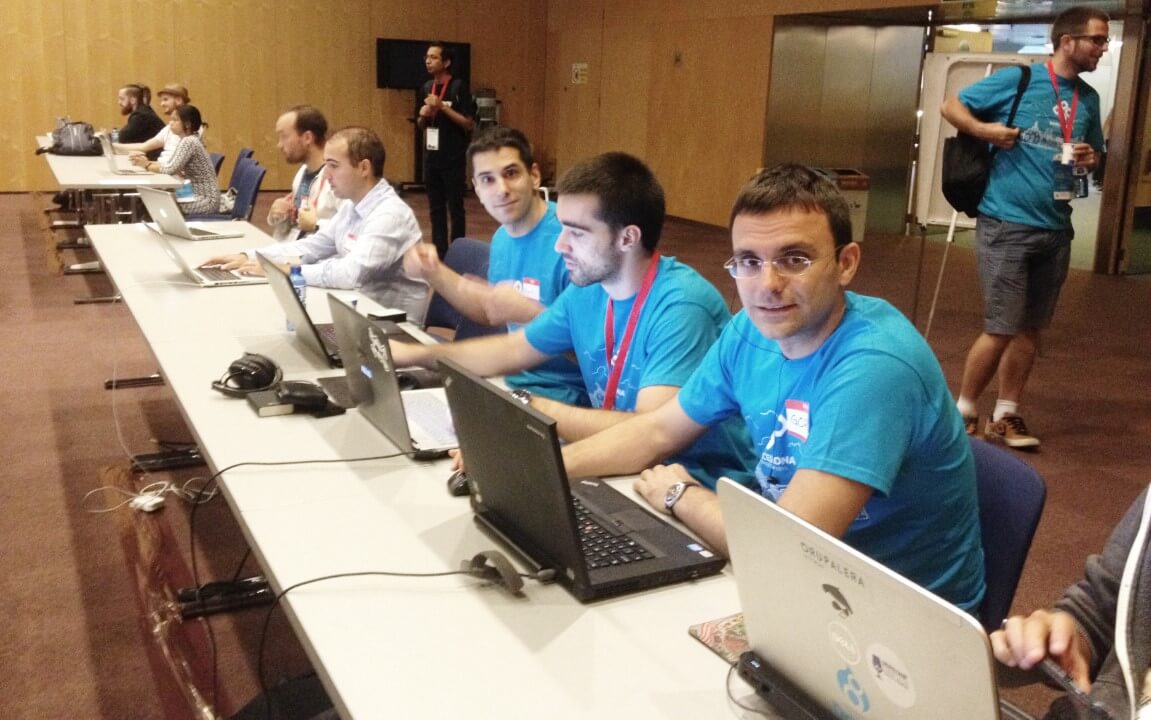 Ever since, I knew people would like the idea and how great the whole concept was, only if presented in a proper way. Dusan couldn’t get rid of me in the next few days, getting a few links each day of the possible places we could rent, until he started searching as well.

The biggest problem in the beginning was to get information from our colleagues who was sure about going to Barcelona and for how long. We decided that for the first test trip the optimal period would be 20 days, but left people the opportunity to stay shorter if they wanted. Dates had to be flexible as we still had to arrange the accommodation. But for renting purposes we needed the exact number of digital nomads and on which nights they would sleep in the apartment, as the price differed depending on the number of people and also agreements with the landlords.

The first reaction of our colleagues was surprise. We could tell the similar idea had never crossed their minds. They started asking a lot of questions, most of which we didn’t even think about ourselves and were crucial for the whole concept to work. So we concluded the meeting and went back to write the document answering all the questions and making some kind of rules of how the whole thing was to work and how we would split the expenses. Everybody could bring their significant others as we already got used to organizing events as a group and knew each other quite well.

The final outcome was quite surprising. There were 11 people willing to risk their relationships with colleagues, work and live in the same place for almost a month. As they say, you don’t really get to know a person before sharing bread with them. 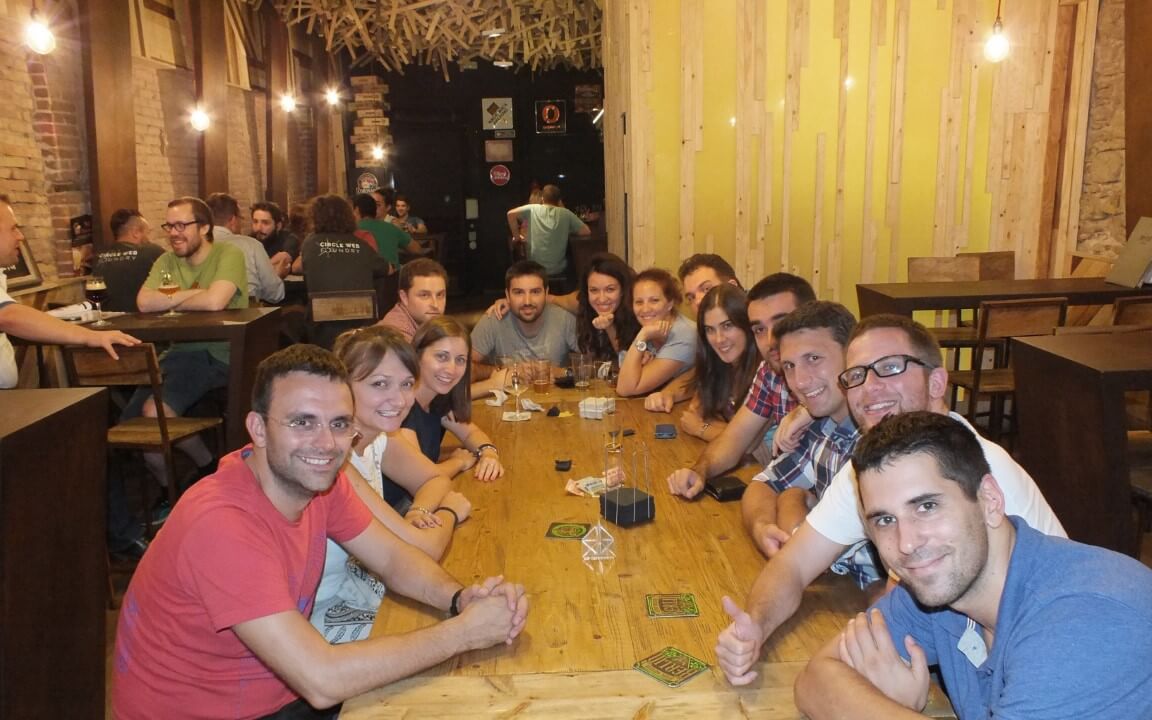 This wasn’t an easy one. It is a completely different concept to rent an apartment as a local, than as a group of foreigners that was going to stay for less than a month. After researching a few local websites, we decided to go with Airbnb, even though we knew it wouldn’t be the cheapest option.

The first problem we encountered was that landlords weren’t so happy with the idea that 11 people would spend so much time in the apartment using electricity. The whole concept of renting apartments on Airbnb to tourists assumed they wouldn’t be spending that much time inside at all. So we spent some time chatting with few of them and explaining.

The second problem was the user experience of Airbnb’s website. If you find a place you would like to rent and follow Airbnb’s suggested steps to pay for it immediately, the owner still has the right to refuse your request in the next 24 hours, but your money stays frozen for at least 15 days and sometimes even 45 days depending on the bank, before it comes back to your account. So, if you’re renting a huge apartment for many people and many days that amount can be significant. Imagine you want to get secured and contact a few listings in case some of them are not available… The best option is to scroll down the page, find the host reviews and then use the option “contact host”, ask her about availability, special deals and so on. Most hosts give a discount if you’re renting for a week, a few weeks or a month and often that is also written on a page of a listing. But if not, don’t forget to ask them. Sometimes it pays off to stay a day longer with that discount.

Now we come to an interesting part. As this was our trial on digital nomad life and we wanted it to work, we were planning to stay as low on budget as possible. So we decided to cook.

We made a plan so that each day a different pair of colleagues would cook. It was a special kind of team building, even suggested by some experts in this field that assume love for food and problems that might appear while preparing food for a large group of people make a stronger connection between team members and teach them how to better communicate in and outside the office. As food is a big thing in Byteout, it was also a challenge not to disappoint the others. Unofficially, it was a kind of a small competition that everybody took quite seriously. 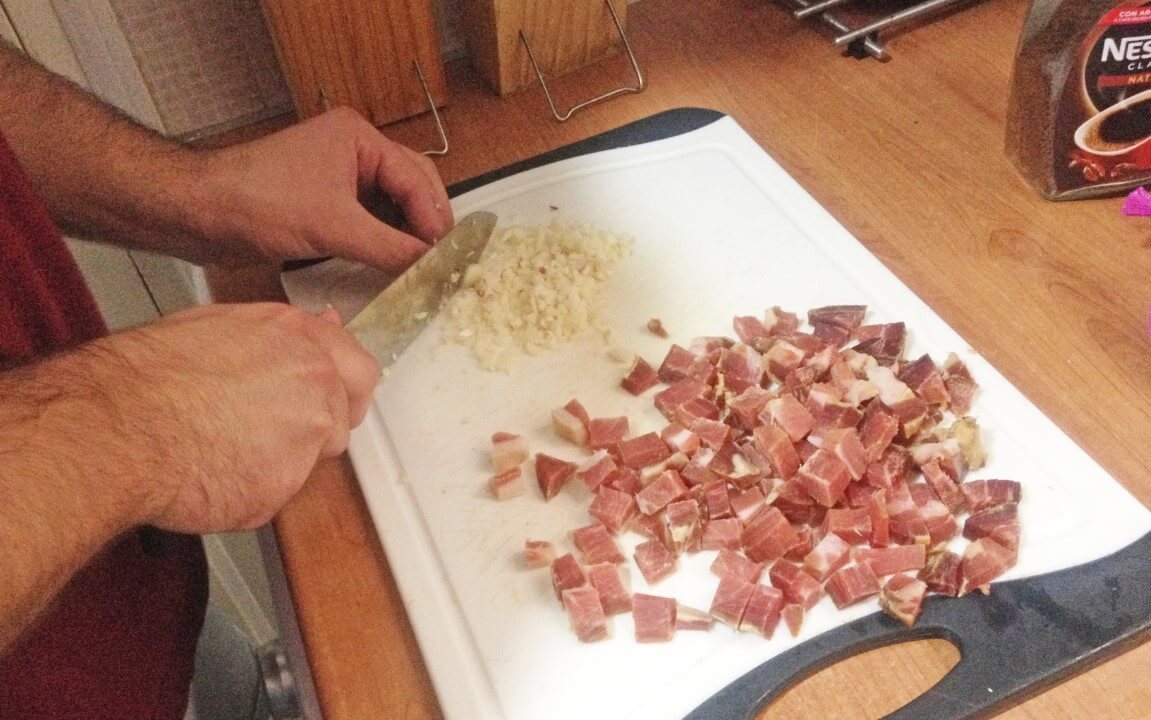 Every single person that has started  working in Byteout has gained a few extra kilos because our lunch has been made the most important part of the day. We’ve been using a catering service for some years already and at 12:30 pm only a few rare souls stay in front of their computers. As the summer was fading away, most of us started complaining about being ashamed to wear their swimsuits, so Dusan put into practise some drastic changes. We started running for 12 km or more around Barcelona every other day. At least some of us did. 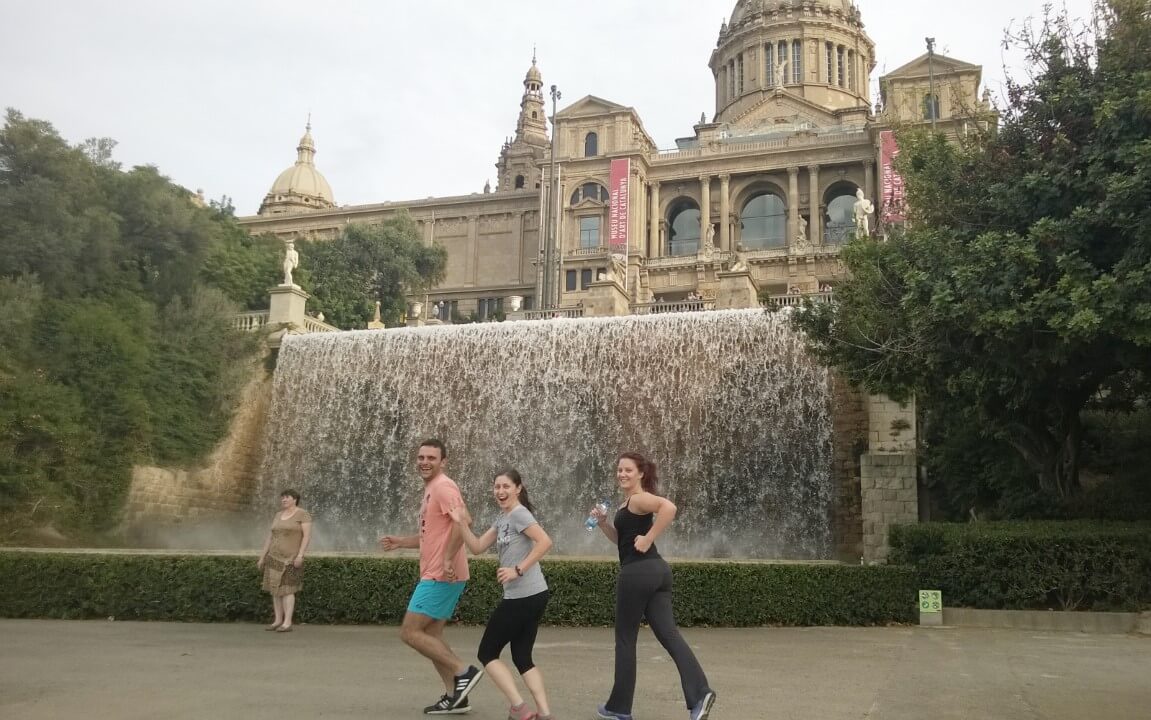 Yes, it was crazy and we have no idea how we even followed him having in mind we were not in our best shape at the time. We even reached Montjuic, a 213 meters high hill southeast of Barcelona’s city center. Yes, we did run uphill. Most of the time we weren’t really sure why we were doing it, but on the other hand it was an interesting way of sightseeing around Barcelona. We really experienced the city and not only the main tourist attractions and most visited parts of Barcelona. This brought us to a new idea.

Apart from running we enjoyed the city in many different ways, so if you ever plan a trip to Barcelona, let us know. We might have plenty of useful tips and tricks. Or you can browse through our album and get the impression of how it all looked like. You must be wondering how this whole experience affected us and how it was evaluated in the office after we came back. We got some fresh ideas about how the working life could look like and that we can stay productive even in very special circumstances if we work well as a team. And that was the most valuable thing we got from this whole experience, the discovery that we are a great team that shares similar ideas and values, meaning that if we had the chance to meet outside the office we would still choose to stay friends with one another.

Negative sides of living together in a foreign country were definitely sharing one bathroom (which brought us to a whole new level of compromise and mutual understanding) and cooking that took a lot of time while we could have worked during those hours. One way to solve that problem could be finding a catering service in the city, but we kind of liked this concept of cooking together and I’m not sure how likely we are to give up on that, even if it saves time.

Would I recommend this way of life to other companies? Depends on the people you have on the team. If they’re not really flexible and adventurous, it might not be a good idea. Also, depending on the comfort needs of different personalities, the life of digital nomads the way we organized it might need a few adjustments in terms of space and privacy. But if you’re not a big team and would like to experiment, try with a large space in the beginning where everybody would have their own rooms and space for themselves if needed. In our case it was only a positive experience that brought us all closer and let us realize how awesome are the people we work with. 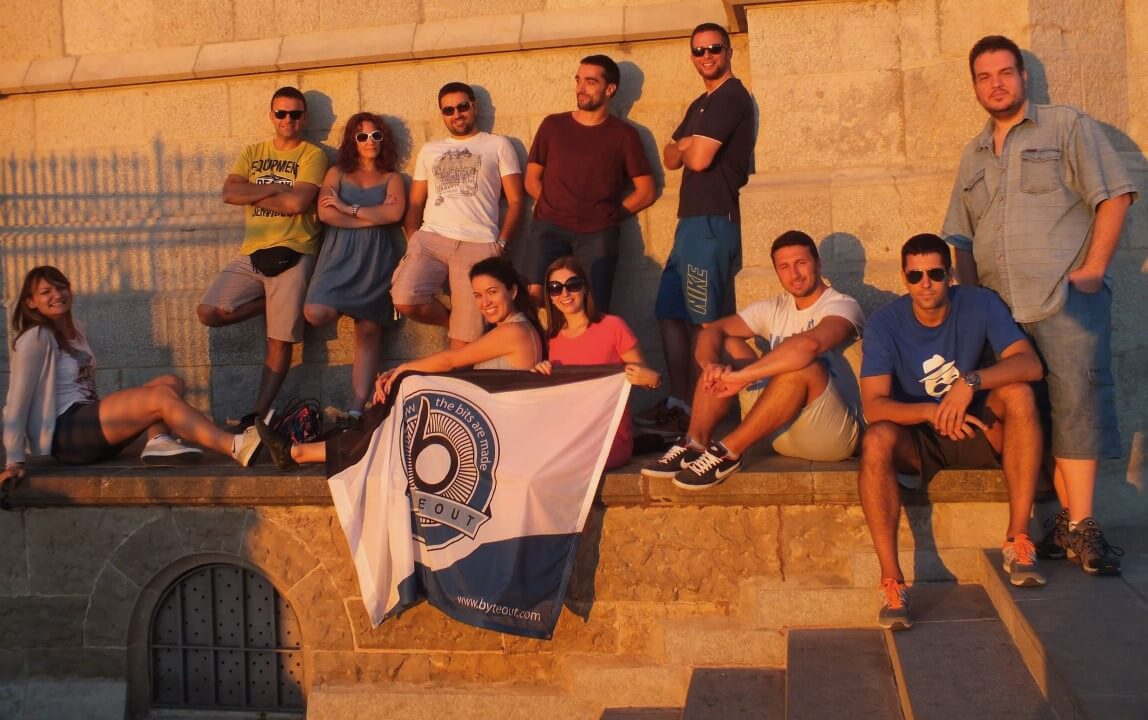 To sum up, we’re moving to Lisbon this year for a whole month. Our new HR Manager, Jelena Martinovic, has done a great job and after only a month spent in the office with us, managed to organize the whole trip. Follow us here, as we’re going to write about all the new ways that came to Dusan’s mind to have fit and healthy employees.

Translating your ideas into the best quality code

Get in touch and tell us what you need.